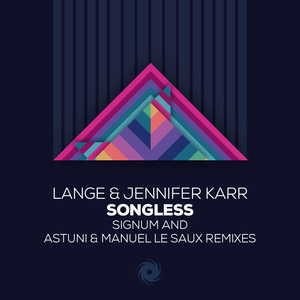 In the same manner as âOut Of The Skyâ, the timeless âSonglessâ has now been revisited. Lange, himself has given it an eleven-years-later recalibration, while Signum and Astuni & Manuel Le Saux have furnished it with a brace of more club-pointed remixes.

Featuring the extraordinary vocals of Jennifer Karr (who went on to write & sing on tracks with Ferry Corsten, PvD, ATB and others), Langeâs re-mastering brings new definition & detail to âSonglessâ.

Signum meanwhile take all the fundamentals of the more downtempo original and port them into an exceptional full spectrum floor-grafter. Built for maximum traction, over 8+ minutes their driven, anytime-of-the-night retake steals breath vocally, while musically burning trainer rubber.

Not to be outdone, the remix calculus of Astuni & Manuel Le Saux version is geared exclusively for the primetime hours. Full of inciting snares, zero gravity synths and Jenniferâs affecting vocals, come the drop the Italian pair pull off a genuine how-did-they-do-that! production moment.
Buy Like Edit